Vehicles in the Philippines

Most of the approximately one hundred million people living in the Philippines do not have their own cars, or even motorcycles. As a result, extensive networks of private persons and corporations maintain transit systems made of everything from taxicabs and buses to person-pedaled and horse-drawn carriages

As an introduction (or reminder) of these vehicles, we have prepared this short writeup of just a few of these which you may encounter:

This Philippines is very well known of its highly distinctive jeepneys (also known as Sarao jitneys) as the major medium for transport. This jeepney is usually seen and used in urbanized ares of the Philippines like Manila, Cebu, Baguio, Dagupan, and many other cities. One jitney can accommodate and carry approximate of 18 – 24 passengers. This type of transportation is usually used for short trips (around 3km to 8km) when you see them in urbanized areas. However, when this type of transportation is used in the rural areas, it is usually used to travel longer distances- usually from one province to another. Through this transportation, you get to see and meet other people whom you can share your smiles with. 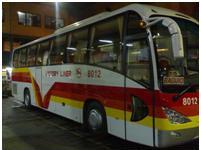 A typical bus in the Philippines is for longer trips. Typically, when someone chooses to travel using a bus, one must intend to travel going from one province to another. A classic trip using a bus would take around 2 – 15 hours of travel time, occasionally even longer. However, buses are also used for short trips within the Manila area (Philippine capital). 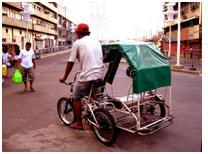 Jeepneys are for the metropolis and pedicabs are for the rural areas. Pedicabs are the rural areas’ alternative to jeepneys. This type of transportation is used to transfer people within short-distanced areas. This transportation is composed of a bicycle attached to passenger seat. This is manually pedaled by a driver carring 2- 3 passengers. The term pedicab came from two words: “pedi” which means pedaled and “cab” which means transportation; meaning, a cab that is pedaled in order to move. Sometimes you can even find daring pedicab drivers in urbanized or even downtown areas. 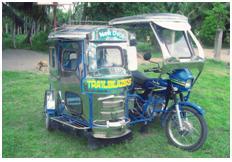 If you need to go further than someone might want to pedal, look for a tricycle. These contraptions are made of a covered motorcycle attached to a covered passenger seat. This type of transportation is suited for about 3 or 4 passengers but occasionally you can see them loaded with up to a dozen people piled on the motorcycle part and on each other in the passenger compartment as well. 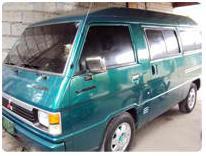 Vans in the Philippines are not only used for private purposes but also for public transportation. Commonly, vans will travel the same routes as larger buses but leave more frequently and charge more. So if you are in a hurry, consider taking a van. 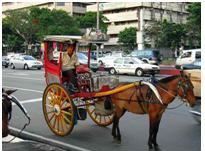 Taxis are usually used by the middle class. People who ride taxis choose to stay away from the hassle and long rides using the jeepney. Fares in taxis are more expensive than other forms of transportation, yet compared to the rate in first world cities, still quite cheap. However, the passengers often need to be savvy or else they might end up paying more than the market rate.

The Philippines is composed of 7,107 islands. It is but logical that in order to reach other places in the Philippines, one would have to use a transportation navigated in water. Bangkas are a popular transportation to go to places that are short-distanced. However, for long-distanced sea-traveled areas, huge ferrys and passenger ships are available for transportation.

We hope, as you visit the Philippines you will enjoy travelling Philippine tourist spots trying out each form of transportation at least once.