What is the Correct Way to Spell Filipina and Philippines?

Ferdinand Magellan and his small fleet claimed the Philippines in the 16th Century and named it Las Islas Filipinas.   He named it in honor or King Philip II of Spain, and thus the Philippines is spelled in English with ph from the name of the king. (Magellan was killed near Cebu, Philippines that same month.)

Over hundreds of years, Philippine culture became increasingly based on Spanish culture as more Spanish missionaries, soldiers, and businessmen spent time in the Spanish colony.  During this time, the Philippines established a simple Alphabet, the abakada. But since there is no letter “F” in the Philippine language’s alphabet (the “F” is from the Spanish alphabet), Filipinos use the letter “P” instead. Filipinos call their country Pilipinas and their people Pilipino. Due to centuries of blending in language and deep influence of the Spaniards especially when it comes to education,“Filipina” and its plural form “Filipinas” can also be used to refer to female natives of the country as opposed to a “Filipino” which is considered a masculine term and therefore only used to refer to male natives. 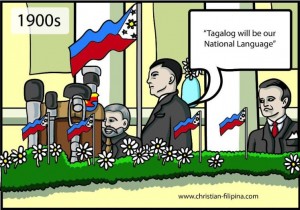 In the 1900s, under American administration, Filipinos recognized a national language. This language was called Pilipino. Also known as Tagalog or Filipino now, it was acknowledged as the country’s National Language by the late President Manuel L. Quezon. The basis for this decision according to record is because Tagalog is widely spoken in most places in the Philippines especially in the City of Manila which is the main heart of the country. This proclamation resulted in criticism from areas of the country where other languages are more widely-spoken. Thus the president decided to change the P from the word Pilipino and change it into F. They overhauled the official alphabet too in the 1970s and again in the 1980s, so it now includes foreign letters such as F. Today the language is officially called Filipino and the country is Filipinas, though Philippines is still the name used when speaking English. The official Filipino language is known as both Filipino (officially) and Pilipino, and the feminine Filipina and Pilipina, as acceptable terms for the citizens of the Philippines.

As written in http://www.pilipino-express.com/history-a-culture/in-other-words/127-the-basics-of-philippino-filipino.html, to sum it all up:

Oh, and Philipino, Philippino and Phillippino? Well, those are just wrong.